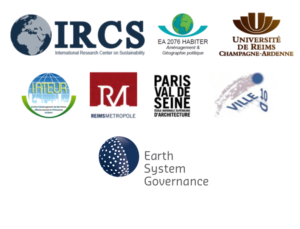 Organized by the International Research Center on Sustainability (IRCS) at the Habiter research laboratory of the Rheims University, in cooperation with partners including the Earth System Governance Project.

The sixth edition of the Rencontres Internationales de Reims on Sustainability Science addresses the livability of underground spaces, and how they can contribute to successful urban transitions to sustainability. Traditionally, the focus in the three-dimensional city is only on height growth. Still, urban subterranean world already host components and networks crucial to ensure a proper functioning of the city. In addition, more and more cities are also designing their future development underground, around the world. They consider underground space to be essential to regulate urban sprawl: Saving land through a better distribution of the urban functions, part of them below the surface. Japanese and Canadian underground developments, in relation with the subway system, made it possible to optimize the necessary public investments through the creation of stores and amenities along the subterranean pathways used by the commuters, which eventually became malls in disguise. More recently, urban land shortage brought about new planning strategies that include what is below the surface: For example, when there is a high property pressure, people start selling or renting their basement as apartments. Master plans start to anticipate long-term underground use -which includes living below the surface- in many cities. The pioneer was Helsinki, which conceived an Underground Master Plan as soon as 2011. Moscow intends to build a “City under Moscow” with boulevards, offices, stores, sports facilities, cinemas, museums and even apartments connected directly to subway and railway stations. In Asia -Chine, Singapore or Japan- number of cities initiated underground development plans.

The potential for urban densification by using the underground space is progressively getting admitted by the local authorities and thus included in public policy agendas. In this conference, we make the assumption that urban planning and design should most definitely engage the depths of the city, as an alternative to urban densification and to externalize nuisances. But actual underground planning -while in progress- suffers from sectored tunnel vision. On the one hand, sectored planning result in the establishment of not connected “underground islands” or “underground patches”. On the other hand, permanent livability of subterranean spaces faces numerous cultural, physiological and technical challenges. Lastly, traditional planning already relegated below the surface the technical facilities and devices that were supposed to be hidden (catacombs, sewers, transport systems, etc.) as well as the activities physiologically “acceptable” without daylight (stores, logistics, etc.). Such a strategic bias coined underground areas primarily as service areas. How could we change this and convert the underground areas into real living places?

This sixth edition of the Rencontres Internationales de Reims on Sustainability Science is in line with the Projet National Ville 10D – Ville d’idées (http://www.ville10d.fr/en/). It calls for the co-operation of various disciplines through 4 different topics that will ignite the debates (behavioral and cognitive strategies; landscapes and architecture; energy efficiency and comfort; sustainable planning). The objectives are determining:

Three half-day workshops will structure this conference under three headings:

This conference attempts to shed light on a new urban development process inclusive of what is under the surface. It addresses crucial theoretical issues such as the recycling of urban areas from an “underground perspective”, and tries to design a future for such cities.