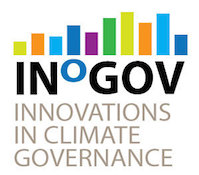 The Earth System Governance affiliated project INOGOV – Innovations in Climate Governance – has successfully completed four years of operation. The network has been immensely productive: alongside a 20 chapter, 40 author book open access book published by Cambridge University Press (Governing Climate Change: Polycentricity in Action?), network members have also edited no less than 10 special issues of international journals, with a further 6 in production, plus 2 edited books.  Many of these materials are fully open access.

Through close networking, INOGOV has established a common terminology around new forms of climate governance enabling a more interdisciplinary dialogue to occur between over 1200 researchers from right across the globe. It has demonstrated that climate change governance is in a state of much greater flux than was ever expected in the late 2000s. Many new and more dynamic forms of governing are appearing around the international regime centred on the United Nations. They appear to be emerging spontaneously from the bottom up, producing a more dispersed and multilevel pattern of governing, which Nobel Prize laureate Elinor Ostrom described as ‘polycentric’.

INOGOV was established in 2014 with the aim of exploring “Europe’s potential for innovation in the climate governance domain”, through engaging in innovative forms of policy. It has fully accomplished this aim by bringing together researchers that have investigated the conditions under which new policies and governance are invented, how they produce new patterns of governing as they diffuse, and what effects they produce, including on the legitimacy and transparency of governance itself.

It has brought together the world’s foremost experts of climate governance to provide the first systematic test of the ability of polycentric thinking to explain, inform and enhance this pattern. By levering much greater value from previous research investments, it has built – in close consultation with key practitioners – a new interdisciplinary coalition of researchers that will actively address these pressing societal challenges in the coming years.

INOGOV has produced a number of other significant legacy products, including:

– A massive online open course (MOOC) on polycentric climate governance, professionally produced by the Dutch Open University. Officially launched in 2018, it is fully open access – hence available to anyone in the world.

– A new cohort of extremely dedicated early career researchers, who together comprised INOGOV early career investigators’ network (ECIN). Many were taught and/or taught at the two spring schools (in 2017 and 2018) and/or have completed the MOOC. They constitute the next generation of researchers and practitioners who will take forwards new research and policy in the Earth System Governance community and other research networks.

Finally, almost every networking event involved practitioners in some capacity; some were even co-organised with policy bodies. The main findings are currently actively disseminated to policy makers in the European Commission, the European Environment Agency, the WMO and the IPCC.