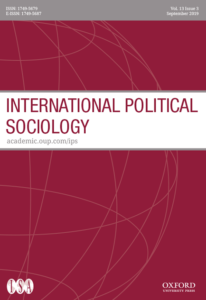 From the social contract theory of Hobbes and Locke to the United Nations Charter, the sovereign state has formed the fulcrum of political order and law. Yet in the Anthropocene, this humanist political containment fails to grapple with humanity’s dangerous enmeshment with the ecological systems of planet Earth. This article addresses one aspect of this dilemma by focusing on the international law and governance of biodiversity, which presents a “blue screen” biosphere: a material simulation that enables a double disappearance of biodiversity from the text of international law and from the actuality of the world. Through a critique of the figure of the “natural resource,” the article finds that the founding texts of international environmental law entrench a twofold humanism-as-statism that simultaneously supports the geopower of the state to facilitate the capitalist appropriation of the nonhuman and imports the modern metaphysics of the human domination of nature into international customary law. Such legal-political ontologies block a path to a more hopeful system of global ecological law and governance based on the “rights of nature” that might be able to honor the intrinsic value of the biosphere as a rich, agentic, and communicative whole, fundamental to the Earth’s survival.