Exploring the agency of Africa in climate change negotiations: the case of REDD+ 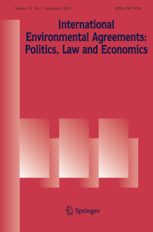 Emerging climate change regimes, such as the mechanism for reducing emissions from deforestation and forest degradation (REDD+), are increasingly aiming to engage developing countries such as those in Africa, in sustainable development through carbon markets. The contribution of African countries to global climate negotiations determines how compatible the negotiated rules could be with the existing socioeconomic and policy circumstances of African countries. The aim of this paper is to explore the agency of Africa (African States) in the global climate change negotiations and discuss possible implications for implementing these rules using REDD+ as a case study. Drawing on document analysis and semi-structured expert interviews, our findings suggest that although African countries are extensively involved in the implementation of REDD+ interventions, the continent has a weak agency on the design of the global REDD+ architecture. This weak agency results from a number of factors including the inability of African countries to send large and diverse delegations to the negotiations as well lack of capacity to generate and transmit research evidence to the global platform. African countries also perceive themselves as victims of climate change who should be eligible for support rather than sources of technological solutions. Again, Africa’s position is fragmented across negotiation coalitions which weakens the continent’s collective influence on the REDD+ agenda. This paper discusses a number of implementation deficits which could result from this weak agency. These include concerns about implementation capacity and a potential lack of coherence between REDD+ rules and existing policies in African countries. These findings call for a rethink of pathways to enhancing Africa’s strategies in engaging in multilateral climate change negotiations, especially if climate change regimes specifically targeted at developing countries are to be effective.