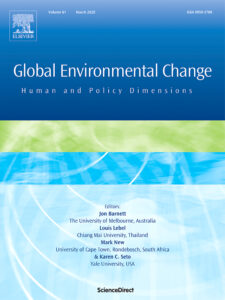 In this article Lead Faculty member Prof. Heike Schroeder discusses the following in the Introduction:

‘Almost 15 years have passed since the idea of REDD+ (Reducing Emissions from Deforestation and forest Degradation and the role of conservation, sustainable management of forests and enhancement of forest carbon stocks in developing countries) was adopted by the United Nations Framework Convention on Climate Change (UNFCCC) and local, regional, national, bilateral, transnational and international policies, programmes and projects emerged under the banner of REDD+ (Corbera and Schroeder, 2011, Agrawal et al., 2011, Lederer, 2012). In recognition of the role forests play in climate change, major donor countries around the world, in particular the top five of Norway, Germany, the US, Japan and the UK, have increased their spending and institutionalization efforts on REDD+ (Dooley and Parker 2015). In 2015, the Paris Agreement sent a strong signal in favor of REDD+ in dedicating one whole article (Article 5) to the role of forests in addressing climate change (Korhonen-Kurki et al. 2019). […]’