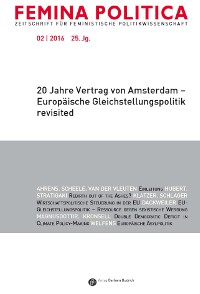 Early European Union (EU) gender research focused primarily on policy areas that were directly relevant to women, e.g., regarding their equal rights and employment (Kantola 2010, Hubert 2012, van der Vleuten 2007, Stratigaki 2012). Recently, studies have emerged in other policy domains, exemplified by gender perspectives on migration (Mushaben 2012), agricultural policy (Prügl 2012), development aid (Debusscher 2014) and security policy (Kronsell 2015), inter alia. These studies have confirmed a lack of gender inclusion and awareness in those policy areas. Abels and Mushaben (2012) edited volume demonstrated the democratic deficit in the EU regarding gender. Because women are both underrepresented within EU institutions and gender awareness is lacking in EU policy-making we called this a double democratic deficit. It excludes women and it excludes gender.

This article contributes to the existing scholarship with its specific focus on gender in the climate domain, significant for three reasons. First, there are documented gender differences in Europe when it comes to male and female views, behavior and adaptation to climate change (Carlsson-Kanyama et al. 2010, Magnusdottir/Kronsell 2015). Secondly, the EU plays an important role in constructing the international climate regime. Finally, having committed itself to gender mainstreaming since 1996, the EU has obliged itself to remedying the double democratic deficit by addressing the representation of women and men in the EU institutions and by integrating a gender perspective into all of its policies (EIGE 2016, Kantola 2010). Scholars have undertaken limited research to date on the gendering of EU climate policy, but earlier studies indicate that EU responses to climate change have been largely gender-blind (Allwood 2014, Alston 2013). Further exploration on the gendering of EU climate policy is long overdue. Our study seeks to contribute to that field by exploring if and in what ways the double democratic deficit plays out in EU climate policy and policy-making; with the help of feminist institutionalism we look for the causes for this neglect within the institutional structure of the Commission. We start by discussing our conceptual framework and the methods used. Next, we evaluate the levels of descriptive representation of women and men involved in EU’s climate policymaking at the Commission. We then uncover indications of gender recognition by scrutinizing key policy documents from the Commission, coupled with the results of our interviews with Commission officials. Correspondingly, we investigate the institutional environment wherein EU’s climate policy is drafted as well as policy outcomes in order to shed light on whether EU’s climate policy suffers from a double democratic deficit and what its possible causes may be.