The Politics of Fossil Fuel Subsidies and Their Reform 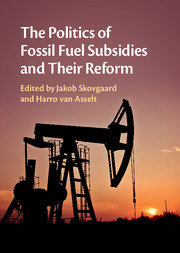 Fossil fuel subsidies strain public budgets, and contribute to climate change and local air pollution. Despite widespread agreement among experts about the benefits of reforming fossil fuel subsidies, repeated international commitments to eliminate them, and valiant efforts by some countries to reform them, they continue to persist. This book helps explain this conundrum, by exploring the politics of fossil fuel subsidies and their reform.

Bringing together scholars and practitioners, the book offers new case studies both from countries that have undertaken subsidy reform, and those that have yet to do so. It explores the roles of various intergovernmental and non-governmental institutions in promoting fossil fuel subsidy reform at the international level, as well as conceptual aspects of fossil fuel subsidies. This is essential reading for researchers and practitioners, and students of political science, international relations, law, public policy, and environmental studies.

With expert contributions from: