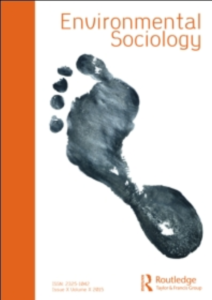 This article investigates the presence of domestic-international linkages in the Lithuanian mass media discourse on climate change. We apply the domestication framework which distinguishes three types of framing climate change in the media: as a domestic issue disconnected from its global dimensions, as a global issue disconnected from the geographic location in which news is being produced and consumed, and as an issue that links together the domestic and international levels. We estimate a Correlated Topic Model for a dataset of 583 Lithuanian news articles published between 2017 and 2018. Classifying the resulting topics as respectively associated with either type of domestication, we find that domestic-international linkages (‘extroverted domestication’) accounts for roughly half of the latent semantic structure of our corpus, while the disconnected globalized perspective on climate change (‘counter-domestication’) accounts for a third. We conclude that the Lithuanian mass media discourse on climate change is strongly internationalized and suggest potential avenues for the further development and application of the domestication framework.