Joining the fray: Researcher engagement in the practical world of sustainability transitions 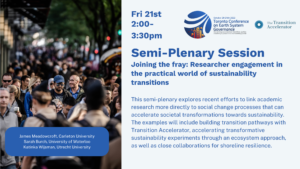 This semi-plenary explores recent efforts to link academic research more directly to social change processes that can accelerate societal transformations towards sustainability. At a point when pressures on global ecosystems and the associated governance challenges are increasingly acute, it is important to investigate how academic research and researchers can more effectively be mobilized to support societal change processes. In many contexts this will require moving beyond traditional models of research, dissemination, and knowledge synthesis to embrace more practically engaged transdisciplinary processes involving stakeholders in processes of collaboration, co-investigation, co-design and co-construction. Such processes can integrate different forms of knowledge, bringing them to bear to define transformative projects, strengthen the position of change agents, identify and overcome practical barriers to change, and accelerate progress towards sustainability.

Speakers at this semi-plenary will present inspiring examples of how Earth System Governance project researchers are trying to engage with this challenge, discuss projects and initiatives with which they have personal experience, and examine how these processes were structured to advance systemic change. The speakers will also explore the many difficulties associated with this type of work. These include decisions about the scale and form of intervention, the selection of collaborators, the negotiation of power dynamics, potential tension between societal commitments and academic rigor and independence, high transaction costs in comparison to other research approaches, outcome assessment and self-critical reflection, and implications for career path progression.

Ultimately the goal of the session is to encourage more colleagues from the ESG network to engage in the messy world of practical change acceleration.

This semi-plenary is sponsored by the Transition Accelerator, a Canadian not for profit focused on accelerating movement to net zero GHG emissions. For the organization’s guiding philosophy see: https://transitionaccelerator.ca/blueprint-for-change/ 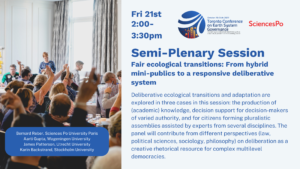 How is it possible to decide democratically, thanks to deliberation, facing the different pluralisms at stake in mini-publics composed of ordinary citizens and experts, and to integrate their proposals into the existing political institutions, with their respective responsibilities? The main problem of this session inspired by the Responsiveness project is that of the transition, adjustment, and sensitivity of knowledge to decision in all its forms. Indeed, responsiveness translates a form of responsibility, understood as sensitivity, adjustment and appropriate reaction. The session focuses on the knowledge mobilized for the ecological transition (ET), a mass of data and heterogeneous knowledge that needs to be adjusted. Similarly, the ET calls for a transition, not to say a translation of knowledge. One transition therefore calls for others.

This transition is as much about practices, habits and disciplinary productions that need to be adjusted to each other, as it is about their adaptation to the or their understanding (sensitivity) by the most heterogeneous audiences, for instance, Citizens assemblies for the climate.

In these three cases, transitions and adaptations that take into account the sensitivity of audiences and contexts are expected at the level of:

o the production of (academic) knowledge,

o decision support, whether for decision-makers with the most varied authorities, or

o for heterogeneous audiences or citizens chosen by sortition to form pluralistic assemblies assisted in their reflections by experts from several disciplines.

Constituted in an interdisciplinary manner, the panel will venture beyond a juxtaposition of knowledge, to face the challenges of moral, political and epistemic pluralisms (Reber, 2016, 2022), of co-argumentations in interdisciplinary fields of the finding of the right place of mini-publics in the existing institutional system, of the co-dependence of descriptive-predictive and normative sciences. They speakers will contribute from different perspectives (law, political sciences, sociology, philosophy) to the deliberation, as a creative rhetorical resource for complex multilevel democracies. This form of reflexive governance will be informed by debates from the theory of deliberative democracy and analysis from recent case studies, like the French Grand débat national, the Citizen convention for the climate or the Conference on the Future of Europe.

It is a huge honour to take up this position with @ERC_Resarch and I am looking forward to supporting the role of the social sciences in high risk, high gain research. https://t.co/9vDs40Jxg4

We look forward to welcoming these new Scientific Council members on 1 January:

In our newsletter, we launch the #CallforPapers for #ESG2023 with hosts @Radboud_Uni on Oct 24-26th 2023. This year's theme 'Bridging Sciences and Societies for Sustainability Transformations' welcomes a range of opportunities for novel contributions.

Introduction by the conference chair: Professor Tatiana Kluvánková (SlovakGlobe at the Slovak Academy of Sciences, and the Slovak University of Technology, and CETIP – Earth System Governance Research Centre)

If you have any questions about the 2022 Toronto Conference on Earth System Governance, you can reach out to our international project office. We will get back to you regarding your questions within a few working days.