Breaking Out of the Green House: Indian Leadership in Times of Environmental Change 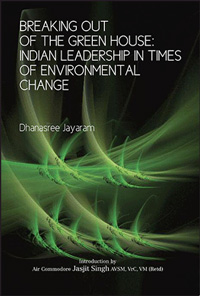 The 2009 Copenhagen summit was a watershed moment in the history of climate change negotiations, especially from an Indian perspective. Brazil, South Africa, India, and China – the “BASIC” group – asserted their position, which led to a virtual collapse in talks, ostensibly marking the ascent of the global “south” and relative descent of the “north.”

The summit placed India in a very difficult situation. On the one hand, India has been on the receiving end of many destructive environmental changes, and on the other, fear of the global recession was looming large.

While India’s leaders may have felt that short-term economics were an overriding factor at the time, it is becoming clear that India cannot simply ignore environmental security forever. This is not a topic that can be segregated and dealt with exclusively. It is one that needs to be explored and understood in an integrated fashion, and one that requires national leadership.

From energy to water, agriculture, trade, and security, “sustainability” and environmental consciousness is – sometimes controversially – permeating policy. Inter-state transboundary and intra-state river water sharing, cultivation of genetically modified food crops, promotion of nuclear energy and biofuels, and environmentally-influenced migration are among many issues that have emerged as bones of contention in the Indian context.

Environmental change is not restricted to climate change and the latter is only one crucial component of the former. Time has come to pay equal attention to non-climate change related issues such as urbanization, deforestation, groundwater depletion, pollution, stress in the availability of resources, and so on, as each of them impact security of the present as well as future generations.

The work strives to evolve an Indian perspective on these strategic issues in what has been a Western-dominated arena. Though the book brings to light several gaping holes in India’s policy and strategy, it contends that India has a plethora of options and opportunities to not only maintain its own national security but also help the world adapt to and mitigate the effects of environment change.

(This abstract is a shortened version of a blog post by the author on the New Security Beat blog, 7 March 2013)