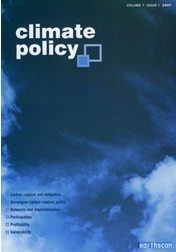 At COP21 in Paris, governments reiterated the importance of ‘non-Party’ contributions, placing big bets that the efforts of cities, regions, investors, companies, and other social groups will help keep average global warming limited to well under 2°C. However, there is little systematic knowledge concerning the performance of non-state and subnational efforts. We established a database of 52 climate actions launched at the 2014 UN Climate Summit in New York to assess output performance – that is, the production of relevant outputs – to understand whether they are likely to deliver social and environmental impacts. Moreover, we assess to which extent climate actions are implemented across developed and developing countries. We find that climate actions are starting to deliver, and output performance after one year is higher than one might expect from previous experiences with similar actions. However, differences exist between action areas: resilience actions have yet to produce specific outputs, whereas energy and industry actions perform above average. Furthermore, imbalances between developing and developed countries persist. While many actions target low-income and lower-middle-income economies, the implementation gap in these countries remains greater. More efforts are necessary to mobilize and implement actions that benefit the world’s most vulnerable people.