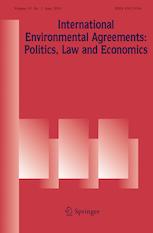 Transnational climate governance has mainly been preoccupied with climate change mitigation, both in practice and as studied in academic literature. However, transnationally governed adaptation initiatives are emerging and increasing in scale. This paper analyses the effectiveness of transnational adaptation initiatives as a particular knowledge gap in this changing evolving governance landscape. Based on a new dataset of 40 initiatives that are governing adaptation across borders and that include non-state actors, it offers an overview assessment. It asks: do transnational adaptation initiatives achieve their stated goals and objectives, and which factors explain their ability to contribute to effective climate change adaptation? Drawing on transnational climate and sustainable development governance literature, an analytical framework is developed to assess to what extent ‘actors’, ‘process’, ‘institutional design’ and ‘context’ can explain effective outcomes. The assessment found that while almost two-thirds of the initiatives were highly effective in achieving goals and objectives by producing outputs, only one-third were highly effective in achieving outcomes, in the sense of leading to substantial change in behaviour of target groups. Where initiatives are effective, the main factors determining success are strong leadership and orchestration, good process management and staff resources, a focus on standard-setting and service provision rather than knowledge transfer, a high level of institutionalisation through binding rules for partners, and good coordination with international regimes. Perhaps less expected in view of the voluntary involvement of actors in transnational adaptation initiatives, initiatives based on ‘hard’ functions (i.e. standard-setting and service provision as opposed to knowledge transfer) and binding rules for partners were found to be more effective.