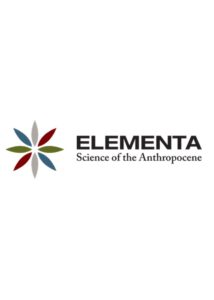 Climate change places major transformational demands on modern societies. Transformations require the capacity to collectively envision and meaningfully debate realistic and desirable futures. Without such a collective imagination capacity and active deliberation processes, societies lack both the motivation for change and guidance for decision-making in a certain direction of change. Recent arguments that science fiction can play a role in societal transformation processes is not yet supported by theory or empirical evidence. Advancing the argument that fiction can support sustainability transformations, this paper makes four contributions. First, building on the imaginary concept, I introduce and define the idea of socio-climatic imaginaries. Second, I develop a theory of imagination as linked cognitive-social processes that enable the creation of collectively shared visions of future states of the world. This theory addresses the dynamics that bridge imagination processes in the individual mind and collective imagining that informs social and political decision-making. Third, emphasizing the political nature of creating and contesting imaginaries in a society, I introduce the role of power and agency in this theory of collective imagination. I argue that both ideational and structural power concepts are relevant for understanding the potential societal influence of climate fiction. Finally, the paper illuminates these different forms of transformational power and agency with two brief case studies: two climate fiction novels. I contrast a dystopian and utopian science fiction novel – Paolo Bacigalupi’s The Water Knife (2015) and Kim Stanley Robinson’s Green Earth (2015). The two books are very similar in their power/agency profile, but the comparison provides initial insights into the different roles of optimistic and pessimistic future visions.

The article is available here